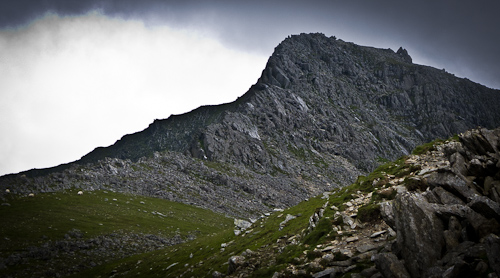 It’s been too long since I’ve blogged – and also too long since I’ve been out in the hills. The weather seems to have been nothing but rain since a trip to the Carneddau in mid May, but today’s forecast was good enough to deserve a day trip to the heart of Snowdonia. And as I’ve just replaced my tired and leaking (but much loved) La Sportiva Trango Alps with a pair of Trango Evo’s, something rocky rather than peaty was required.

The Gribin Ridge seemed to fit the bill. An easy scrambling route onto the Glyderau plateau, and I could head over Glyder Fawr and then down into Cwm Idwal via the Devil’s Staircase.

It’s always surprising how quickly you leave the A5 (and the crowds) behind as you climb away from Llyn Ogwen. First stop was Llyn Bochlwyd, which is a great viewpoint for Tryfan and back across the valley to the Carneddau. I headed west, picking up the path that heads up towards the Gribin. there are a few rocky steps you can play on in the lower part of the route, but a path follows the line of least resistance and brings you out to the ‘football pitch’ where the rocky crest of Y Gribin  can be properly appreciated.

The path keeps on, below and to the right of the crest, with great views down into deserted Cwm Cneifion and the winter climbing routes on Clogwyn Du. I should probably have left the path earlier than I did, as the cairn marking the descent route came into view quite quickly. The new boots were great -grippy, and confidence-inspiring when edging, and felt a lot more ‘tactile’ than the Trango Alps. Also, the shockingly bright blue finish is now toned down with a subtle layer of dust and dirt.

The path across the plateau to Glyder Fach is heavily cairned, but visibility was good enough today not to need them. A bit of high cloud was blocking the sun, making photography far from ideal, and there was a good cooling breeze. I’d been on Glyder Fawr twice before – but only in winter, with good snow cover and crampons. It’s actually a lot harder work when there’s no snow, and the screes down to Lyn y Cwn (which had been easy in winter) were something of a slithery nightmare.

The positive side is that it’s a lot easier to locate the Devil’s Kitchen path when there’s no snow. I’d spent 15 minutes trying to find it on a previous visit… The path down below Twll Du is steep and rocky, but very well maintained. I took the left fork to take me round the quieter western side of Llyn Idwal. Plenty of wild flowers out, including Butterwort and Mossy Saxifrage, and a couple that I haven’t identified yet.