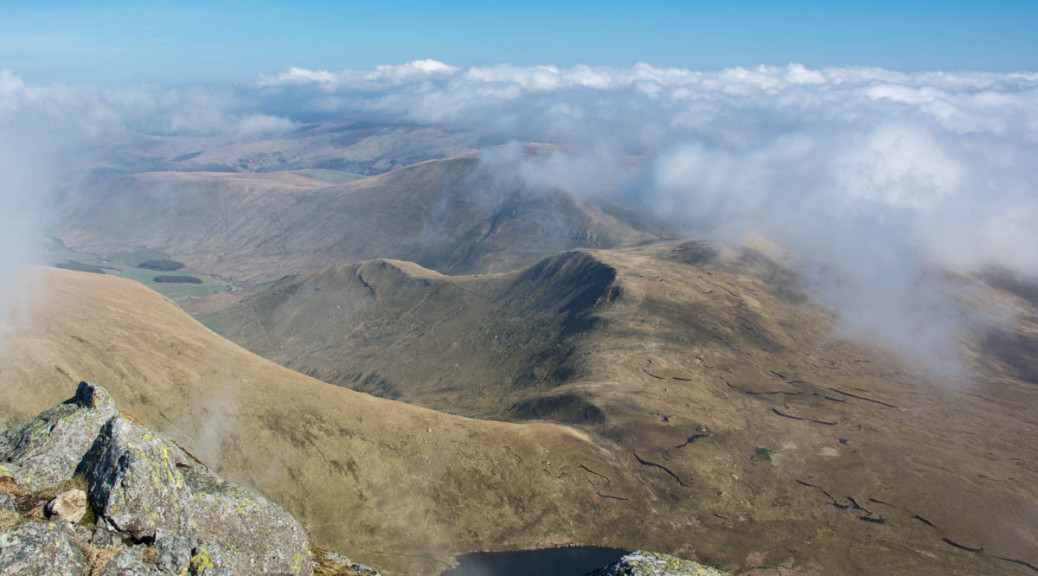 Combinations of work, lack of motivation and the ridiculous excuse for a winter meant that today was my first day on the hills this year. The forecast looked too good to miss, with little rain and cloud free summits on offer. MWIS were forecasting high winds in the north of the park though, so a visit to the Arans seemed a  good idea.

After an early start I was on the hill by 8.00, following the stream up behind  Bryn Hafod in Cwm Cywarch. The forecast wasn’t entirely right, as there was still a good amount of low cloud around and visibility dropped right down as I reached the sheepfolds just beyond the head of the cwm.

The wind had dropped completely, and all was silent apart from a strange, almost mechanical noise which appeared to be coming from the large swampy pond by the fence junction. Convinced that my ears were playing tricks, I edged closer and the sound resolved into the unsynchronized ribbeting of dozens of large toads in and around the pond. I crept closer, but I think my orange fleece gave the game away and the pond was instantly silent.

From here, the out-and back visit to Glasgwm was uneventful, but the summit was still in the cloud. A few patches of snow remained on the scree, but with temperatures rising dramatically they’re unlikely to stay for long. 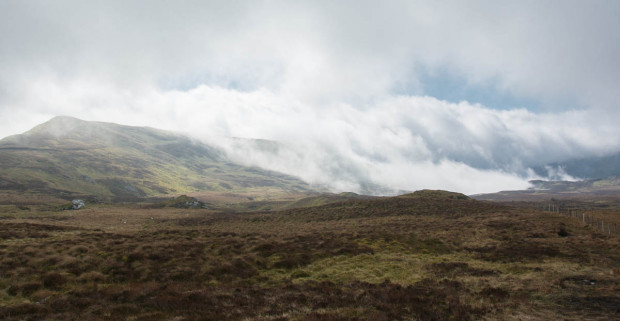 Following the fenceline to towards Aran Fawddwy,  there’s an interesting selection of duckboards intended to help keep your feet dry. Some are useful , but many more are just plain dangerous – either rotting, or unbelievably slippery. The best one acted as a see-saw:  as soon as I put weight on it, the far end lifted up as my feet sank deeper into the water. 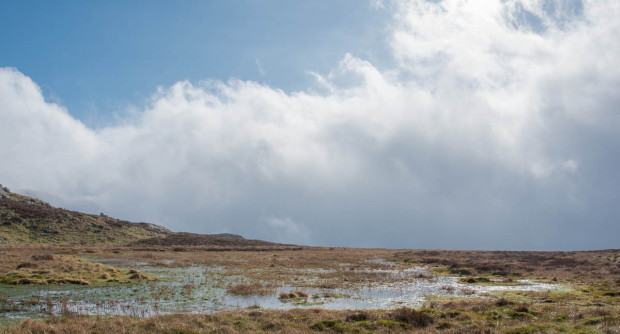 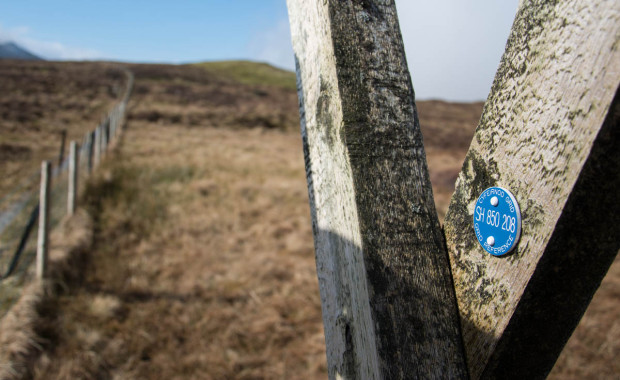 But, as I negotiated this section, the weather began to clear. Slowly at first, with just occasional glimpses into the middle distance. I stopped for a bit to eat near another large reed-filled llyn, and was again greeted by the sight and sounds of hundreds of large toads. 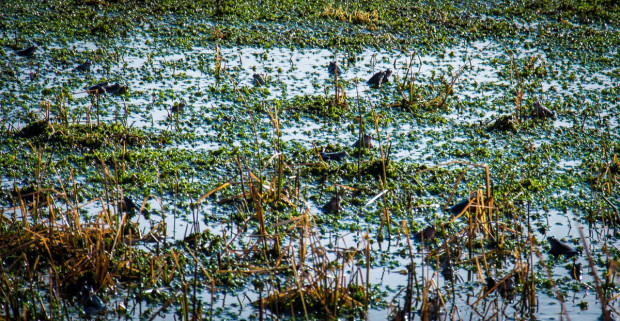 This time I was quieter (and less orange) so was able to take some pictures. The fenceline from here continues almost to the summit – passing a lower subsidiary top a few hundred yards before the trig point perched on the edge of the cliffs above Creiglyn Dyfi 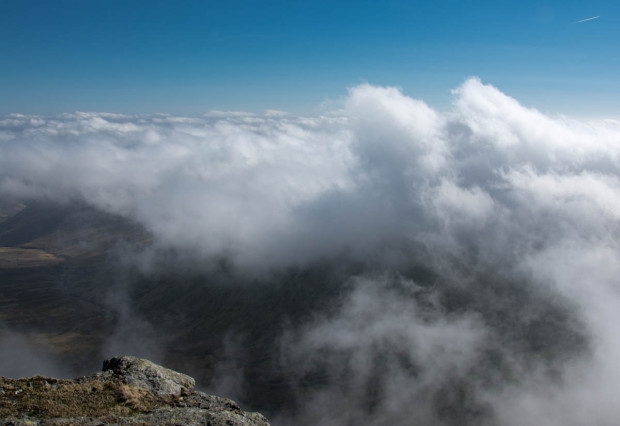 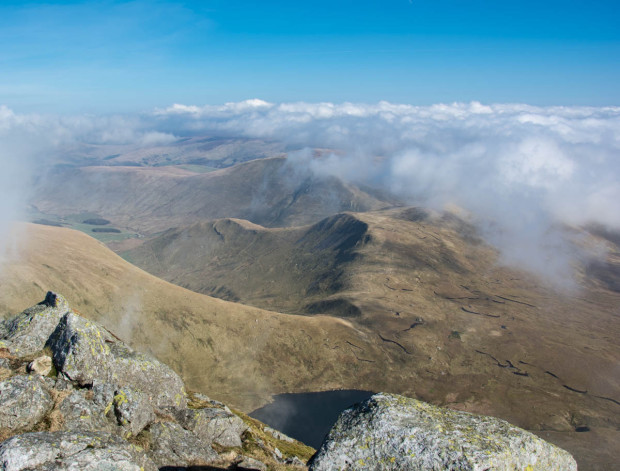 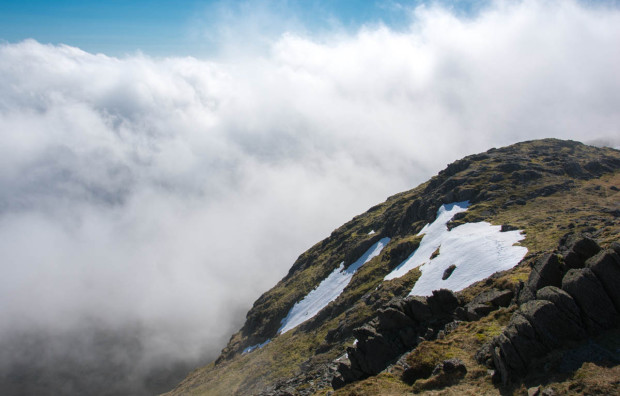 Arriving at the trig, the cloud was still all around, but a few minutes wait was rewarded with gorgeous blue skies, with clouds around and below in all directions. Grinning wildly, I headed downhill past the Drws Bach memorial cairn before taking the long gently graded path down Hengwm back to the car. 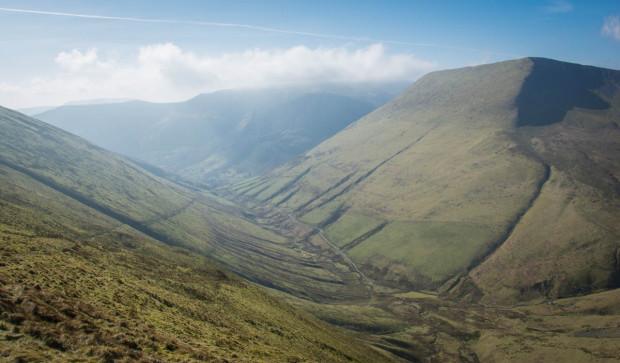