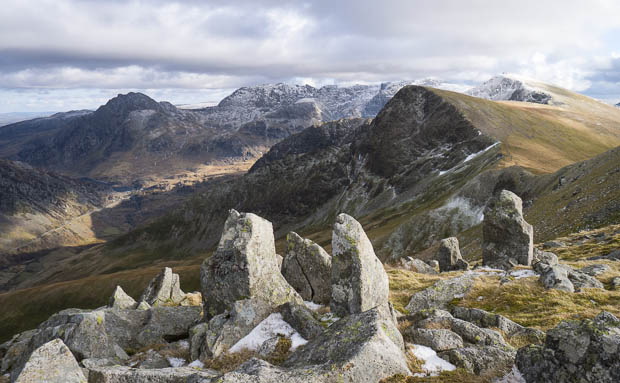 When I think of the Glyderau, the first word that springs to mind is “Rock” – from the scrambles of Y Gribin and Tryfan’s North Ridge to the frost-shattered boulderfields of Glyder Fach and Fawr, grass is generally in short supply. I knew the approach from Nant Peris would be different, but I wasn’t really prepared for the scale of the contrast.

I’d started at the Nant Peris ‘park and ride’ (Loos firmly locked against foreign invaders at this time of year. This seems to be a theme of this blog…), walked past the landmarks of the Vaynol Arms and Llanberis MRT base, then taken the footpath beside the chapel that leads you onto the hills. Looking back, the views up the glacial breach of the Llanberis Pass start to open out, the impressively folded and tilted strata of Clogwyn Mawr standing out across the road behind. The comparatively steep section of hillside at the start before the cwm opens out is a reminder that this is a hanging valley.

The day’s main target was Elidir Fawr, one of the fifteen Welsh hills over 3000 feet. It has suffered more than its fair share of devastation – first the Dinorwig slate quarries, and more recently the Marchlyn Mawr reservoir feeding the Dinorwig pumped hydro facility. The slate spoil heaps are visible on the left at the start of the valley, but to see the full scale of what’s been done you need to head down to Llyn Peris. Looking behind as I climbed, the dusting of snow helped mark out the features – The Llanberis path to Snowdon’s summit and the Mountain Railway were easily visible, along with the frozen waterfalls of Craig y Rhaeadr.

The summit of Elidir Fawr is hidden from view as you head up the cwm, with some scree high on the steep north side the only real indication of the size of the hill above. Rather than a frontal assault, my route took be up to Bwlch y Brecan, which is where things change radically. As you near the Bwlch, the scree slopes of Foel Goch come down from the right, and Y Garn’s snowy summit cap was visible behind. Reaching the edge, the panorama of Carneddau and Glyderau is a stunning contrast to the grassy cwm.

From here, a path heads below Mynydd Perfedd and over a short section of narrow ridge overlooking Marchlyn Mawr.

The path becomes increasingly rocky towards the summit, but apart from the last hundred metres there was little rime on the rocks. Crampons and axe were just acting as excess baggage today. The summit shelter was a good place for a break, and to watch and listen to the ravens overhead. Snowdon’s summit was mostly out of cloud, and there were distant views to Hebog and the Nantlle ridge.

From here, my route took be back down the ridge to Mynydd Perfedd, then on to Carnedd y Filiast. Hugging the edge gives the best views over the Nant Ffrancon valley to Ogwen, including the impressive slabs on the higher slopes of Cwm Graianog.

Once back at the bwlch, I followed the ridge down before dropping down across the Afon Gafr and following a an indistinct path through the cwm and on down to the road. The light was starting to fade, and flurries of snow were blowing around now. Good timing, and a great day out.