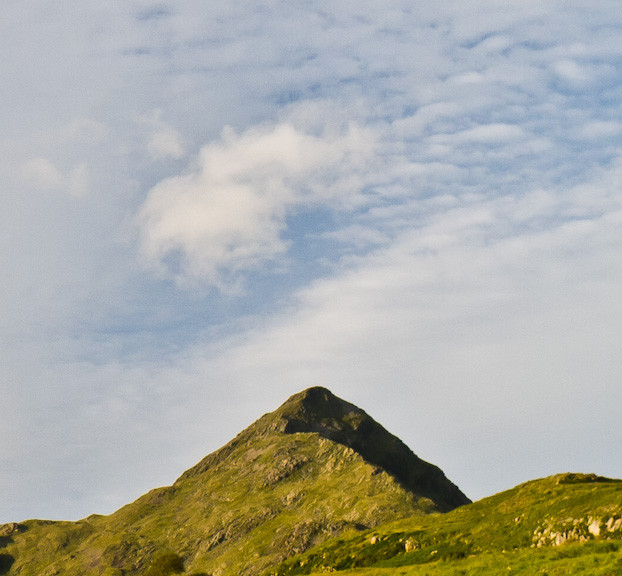 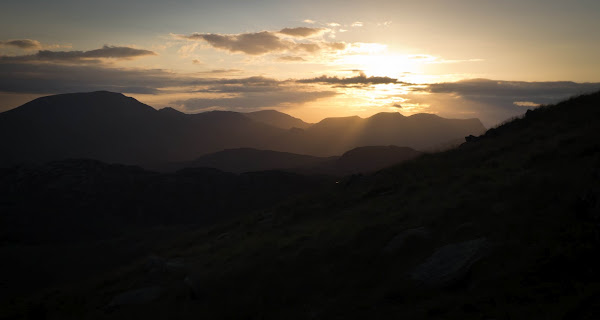 9:30PM on Friday night. The sun has just gone down, the last rays weakened by the cloud rolling down off the Glyderau plateau and masking the tops of the Snowdon horseshoe. I’ve reached the summit of Cnicht, and it’s time to find a spot to camp before the light dies.

If It wasn’t late when I left, it was definitely late when I arrived at Croesor. A combination of glacially slow traffic lights on the A470, a locked loo at Tan-y-Bwlch and an errant satnav meant it was almost 8PM before I was walking. Not ideal, but it would give me time to climb Cnicht and onwards to a pitch near Llyn yr Adar. 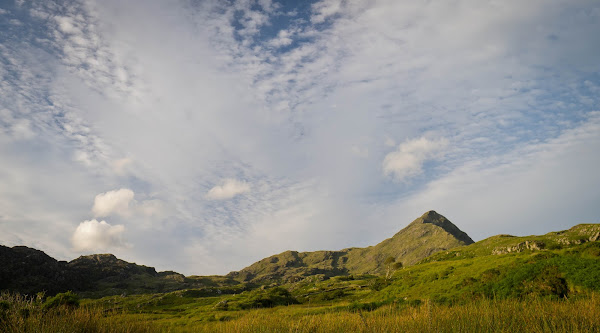 The route to Cnicht is well signed from the car park at Croesor (which incidentally boasts a 5-star portaloo, so I hadn’t needed to try and break into the other ones…) , and the low angled light set off the surrounding hills beautifully.  After a couple of quick stops for photos and snack I was on the easy scramble to the summit. 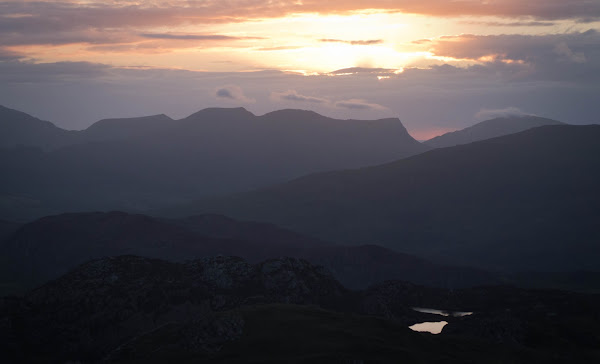 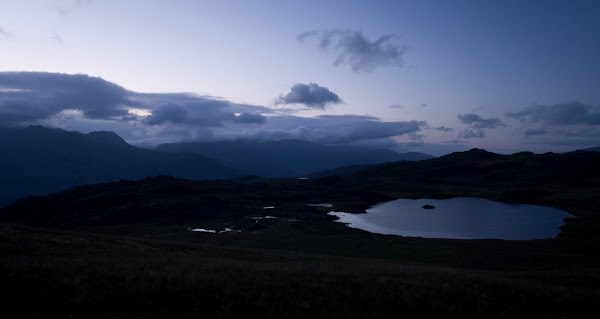 As I walked the ridge towards Llyn yr Adar, the light was fading fast and the temperature dropping. The land close around the lake is incredibly boggy, so I opted for a slightly higher and drier pitch closer to the path.  I’d soon got the tent up and into some extra layers. While water was boiling for supper, the wind picked up noticeably and the first drops of rain arrived, so I retreated inside and ate from the comfort of my sleeping bag.  The tent amplified the noise of the rain – by now incredibly heavy – but the shower didn’t last for too long and I was soon asleep.

The cloud was down when I first poked my head out, so I treated myself to a lie-in before making coffee and venturing out. Hardly glorious sun, but the views down into Cwm Cwmorthin were enough to get me up and moving. The initial plan was to visit the Rhosydd quarries and then head on to Moel yr Hydd, before tackling Moelwyn Mawr and Bach. 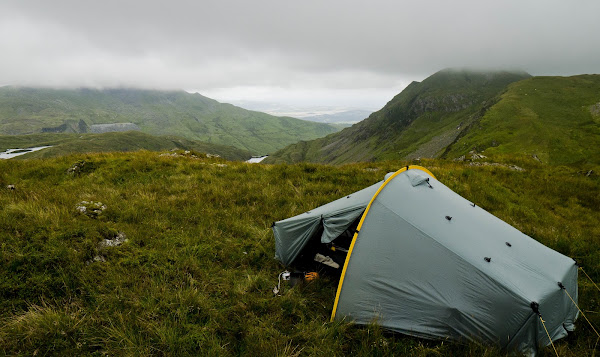 The lake immediately Cnicht – Llyn Cwm y Foel – was considered as a location for a pumped hydro power station in the 1970’s – but Dinorwig (AKA Electric Mountain) was selected instead. (More on this topic later, I suspect…)

The path down from the col is clear at first, but peters out as you cross some rocky ridges, and you have to been on your toes to check that each lake you pass is actually the expected one. But the visibility was good overall, and the spoil heaps over the quarries were an easy target to aim for. There’s a definite change in the feel of the area as you approach the quarries. The light sparkles and reflects off the slate spoil, and the roofless quarry barracks can be seen from way off. 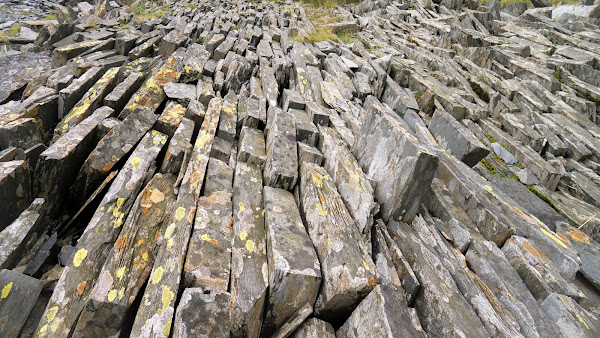 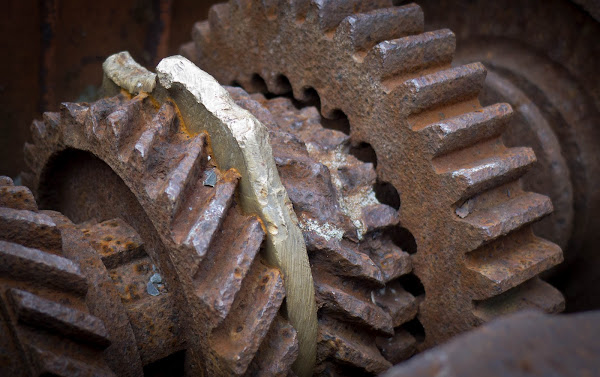 You could spend hours wandering around the quarries, but it’s hard to imagine what it must have been like to work here year round when the quarry was open. The Welsh slate quarries had a mortality rate of over 3 deaths per 1000 workers, per year.

With that to ponder on, I headed carefully up past the spoil heaps towards the upper quarry workings and on to Moel yr Hydd, overlooking Blaenau Ffestiniog. The summit gives good views, and has an obvious rocky outcrop on the highest point, so has been spared an unnecessary cairn.

There’s still a good variety of wild flowers around here at this time of year – the heather is starting to come out, and even though the Cottongrass “flags” are by now flagging a little, you can still find Bog Asphodel. Milkwort and Wild Thyme. Tormentil and Heath Bedstraw seemed to be everywhere, and the spoil heaps around the quarries were covered in glorious Stonecrop flowers- easy to see how this plant, which can take root almost anywhere, gets its name. 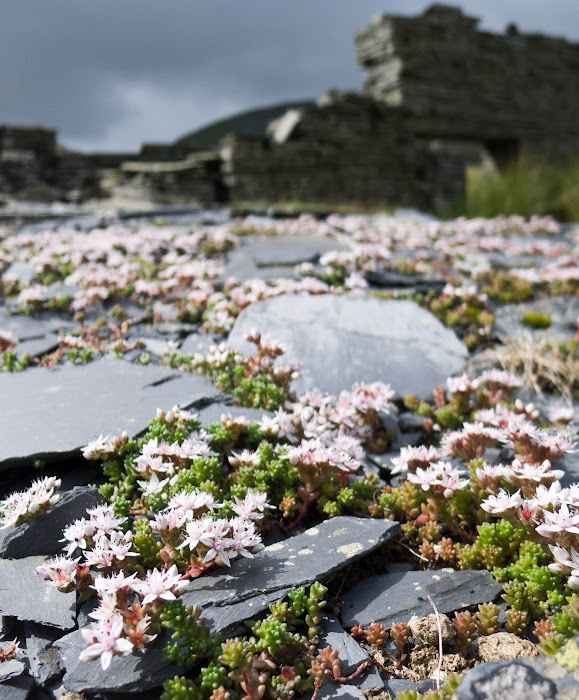 As I headed down off the hill, the drizzle began in earnest. I decided that I wasn’t feeling brave enough to exploring the scramble over Craigysgafn to Moelwyn Bach on wet rock, so headed to Croesor quarry and down the valley via the wide track that would have been the access road. 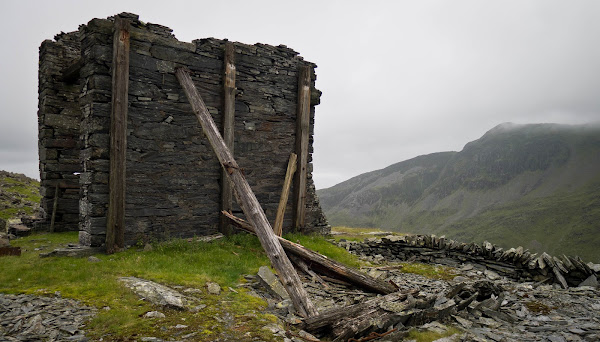 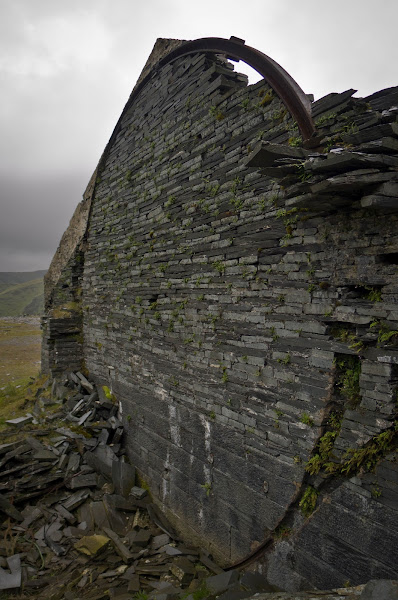 Right next to the car park is the little Oriel Caffi Croesor, which does a great line in egg and bacon rolls and proper Espresso. I ate and drank in the dry, watching as the light rain turned into a torrential downpour.