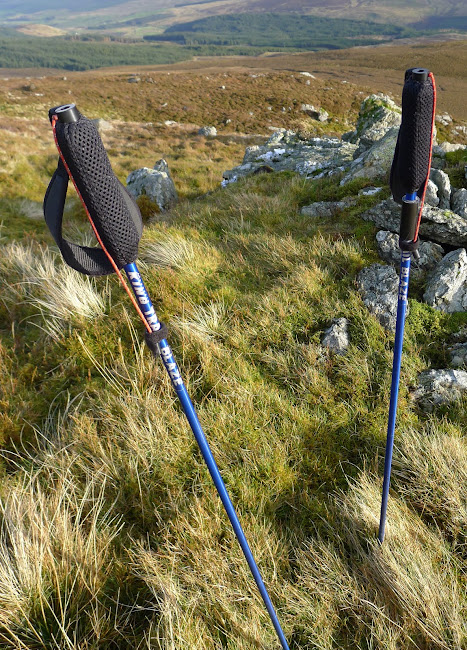 I haven’t always got on well with trekking poles: not so many years ago I comprehensively sprained my ankle by tripping over one. “Clumsy” would be putting it politely.  My balance and movement skills are rather better these days, but it took me almost a year before I’d trust myself using one again. A couple of years back I switched from a single pole to using two, and found that worked well for me.

I was happy with my old poles, a pair of Leki Makalu carbon ones, but thanks to a bit of grade 1 stupidity I left them in the car park at Dan yr Ogof at the end of a walk. The staff were helpful one the phone, but the poles had long gone. Hopefully someone else is getting some good use out of them now.

The Lekis had let me down once, when an adjuster failed on top of Carnedd Llewellyn – so looking at something else (and something cheaper) seemed a good idea. I’d read Petesy’s review of the Mountain King Trail Blaze poles, but was concerned that even the longer 120cm model wouldn’t suit my lanky 6’3″ frame, but apparently Bob at BackpackingLight uses them and he’s the same height. (There’s now a 130cm model, but that seems too long, even for me.) While the Trail Blaze poles are very light (125g each, if you believe the MK website – mine are a little over 135g), the real benefit is that they shrink down to just 36cm when packed, while conventional poles are typically over 60cm, with four folded sections rather than three telescoping ones. The length means they’re a lot easier to stow on your pack when you don’t need them – either in the wand pockets, under compression straps, or even just velcro’d on to the front of the shoulder straps. (I tried this last briefly, and while it’s possible, any stumble will likely end up with a walking pole in your eye socket). For scrambling you can even stick them inside your pack, which is ideal.

Assembling and dismantling the poles is really straightforward. A shock cord runs the entire length of the pole, and pulling this taut makes the pole sections slot into each other. Then, pull (harder!) until a knot in the cord comes out the top, which slots into a notch on top of the handle to keep the tension. The loose end of the cord can be tied round the pole using the Velcro loop which normally wraps the pole sections together when they’re collapsed.

There are some downsides, of course. You can’t lengthen the poles slightly for descents like a normal pole, and the fixed height means they may not work well as supports for Tarp shelters. And unsurprisingly, they feel a bit flimsier than ‘proper’ poles but despite a few clumsy attempts I haven’t been able to inflict any serious damage on them. And, if you accidentally plunge them deep into typical mid-Wales gloopy  bog, then as you pull to extract them the joints will pull apart a bit as the shock cord stretches, until they finally pop out of the mud and snap loudly back together. At times they feel slightly ‘rattly’, but if that gets noticeably bad, then re-tensioning the shock cord should be straightforward.

I like to keep a length of spare duct tape wrapped around a pole – with the Trail Blaze, this also helps keep the loose end of the shock cord nicely tensioned. Without it the velcro loop can move up and flap around a bit.